US Vice president, Kamala Harris' stepdaughter has signed a modeling contract with IMG models after commanding attention on Inauguration Day

According to Ivan Bart, the president of IMG Models, which works with models including Bella and Gigi Hadid, Christie Brinkley, and Karlie Kloss, the decision to sign Emhoff had to do with her “authenticity”.

“It’s not really about shape, size or gender anymore,” he told The Times. “Ella communicates this moment in time. There’s a cheekiness and a joy she exudes.”

Emhoff, a fine art student at the Parsons School of Design in New York City, commanded attention after appearing at the presidential inauguration in a bedazzled Miu Miu jacket.

Reacting after signing with the agency, considered one of the most prestigious in the world, Emhoff told the outlet that she was initially surprised because she “never saw that as being part of my timeline” when she was younger.

“I was pretty surprised when everything with IMG was happening because when I was younger, I never saw that as being part of my timeline,” she said, adding that she had her doubts about entering a world focused on appearances.

According to Emhoff, she decided to go into the modelling world after seeing a recent push for diversity, with the 21-year-old telling the outlet that she hopes to be “part of that change”.

Following the announcement, Emhoff’s mother shared her support on Twitter, where she wrote: “Very proud (but nervous) MAMA! Ella will stay true to her cheeky self with all of our support.” 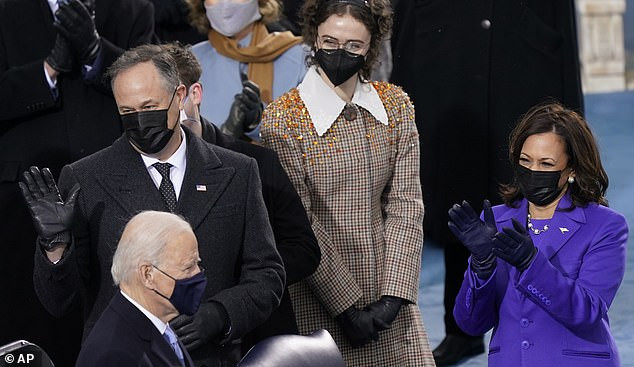