Rapper Eldee has lent his voice to the debacle between his brother, Jude Okoye, and Nigerian Singer Cynthia Morgan.

Recall that over the weekend, Cynthia Morgan spoke out on her ordeals after signing with Jude Okoye’s Northside Entertainment.

Cynthia who now bears the name ‘Madrina‘, also revealed how Jude Okoye, took over her VEVO, Instagram accounts and made her stop using the stage name “Cynthia Morgan”

Taking to Twitter, Eldee, stated people can’t sign a contract and then turn around later to complain about how they are being cheated.

The veteran rapper stated that if a company offers one a bad deal, it should not be signed and that if the person goes ahead to sign such a contract, it must be honored.

According to him, not honoring a contract is dangerous to growth in any ecosystem.

”Don’t willingly sign a contract & then turn around a while later to complain about how you’re being “cheated”. If the terms are no longer favorable, renegotiate, but remember that your partner also reserves the right to accept the new terms.

You can’t sign a financial agreement and expect to change the terms halfway into the deal, unless that option/clause exists in the agreement to begin with.” he tweeted

Read his tweets below!: 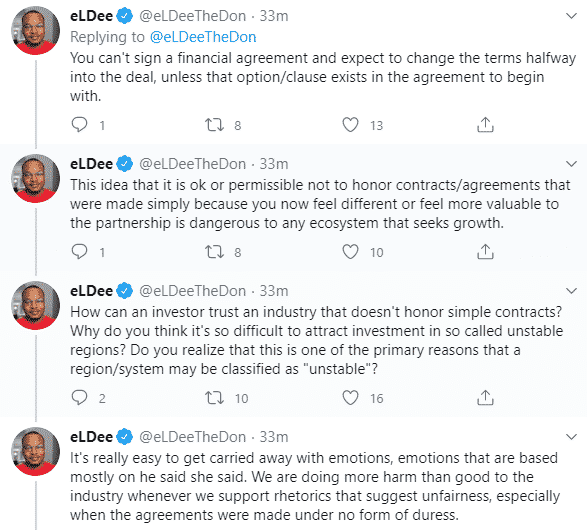