Twelve new cases of COVID-19 have been reported in Nigeria, says the Nigeria Centre for Disease Control.

Nine were recorded in Osun State, two in Edo State and one in Ekiti State.

Nine have been discharged while two deaths have been recorded.

The pandemic has been recorded in 11 states and the Federal Capital Territory, Abuja.

Lagos State topped the chart of COVID-19 cases in Nigeria with 82 cases followed by the Federal Capital Territory Abuja with 28 cases.

With the nine new cases in Osun State, the South-West state followed with a total of 14 cases.

Oyo State has eight cases including Governor Seyi Makinde while there are four cases in Ogun State.
With the new cases announced on Wednesday, Edo’s cases jumped from two to four while Ekiti’s rose to two. 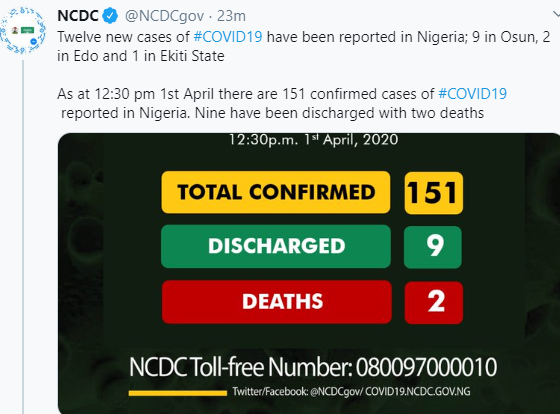