A brilliant Nigerian woman has been rewarded with a scholarship by the Governor of Bayelsa state.

Ebizi Eradiri, the first female first-class graduate from the Faculty of Law of the state-owned Niger Delta University (NDU) has been honoured by Bayelsa State Governor Douye Diri on Monday.

The Governor announced scholarship to Ebizi Eradiri for her master’s and doctorate degrees in any university in Nigeria or abroad.

Miss Eradiri is the first female first-class graduate from the Faculty of Law of the state-owned Niger Delta University (NDU), a feat she repeated at the Nigerian Law School.

Chief press secretary to the governor Daniel Alabrah said the governor also offered her employment to lecture at the NDU Facility of Law after her studies.

He said the governor made the offer of employment while formally receiving the young lawyer and her father, Boloupaye Eradiri, at the Government House, Yenagoa.

Diri assured her of the state government’s support in advancing her educational career in any university of her choice anywhere in the world.

“I hereby announce automatic scholarship for Barr. Eradiri’s Master’s and Doctorate degrees, which will not be restricted to Nigerian universities but any university in any part of the world.

“As a Visitor to the NDU, I also direct that she be given automatic employment to lecture.

“You have the support of your family and your government to fly higher because what you have achieved is just the beginning.”

Diri, who also named Eradiri as the New Face of the Bayelsa Girl Child, said the gesture is aimed at making her a role model for young girls in the state and the entire Ijaw nation to emulate.

He equally dismissed speculations, particularly in the social media, about his administration’s choice of honoring Nengi Hampson of the last edition of Big Brother Naija show while refusing to recognize Eradiri as blatant lies.

“Today has brought to an end speculations, especially in the new media, about our refusal to honour Barr. Eradiri while we have honoured Nengi of the Big Brother Naija fame. This is a blatant lie,” he said. 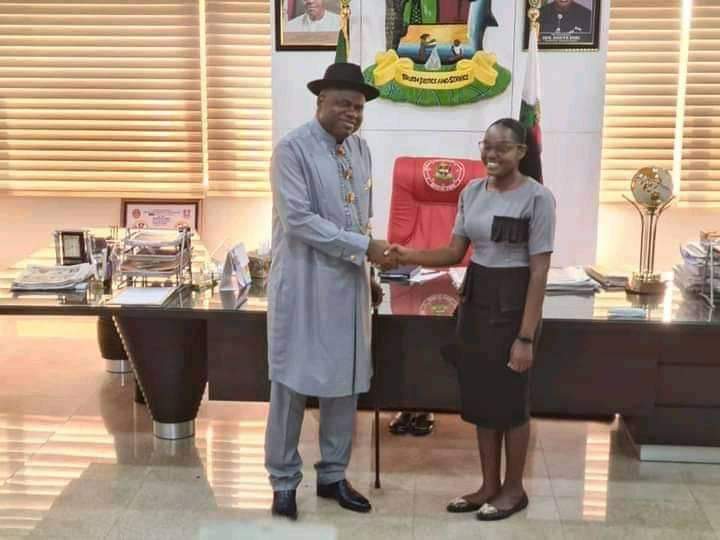